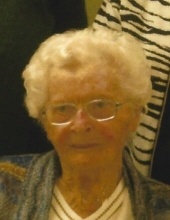 Ellen Imogene Baysinger, 98, of Russellville, passed away Thursday, March 28, 2019, at The Timbers in Holts Summit.

She was born October 21, 1920, in Enon, Missouri, the daughter of the late Harry and Nellie (Amos) Proctor.

Imogene was united in marriage on July 11, 1942, in St. Louis, Missouri to Aubrey Harold Baysinger who preceded her in death on February 19, 2001.

Imogene taught elementary for many local schools including Mary’s Home and Eugene. She later worked for the Department of Employment Security for over 30 years.

She was a member of Enon Baptist Church. She enjoyed quilting, gardening and farming with her husband.

Imogene had a loving and caring heart. She was always willing to give to those in need and help anyone.

She was preceded in death by her parents; her husband; her son, Robert “Bob” Baysinger; one sister, Neva Hogg; and three brothers, Elroy, Nelson, and Glendon Proctor.

Visitation will be 3-5 p.m. Sunday, March 31, 2019, at Scrivner-Morrow Funeral Homes in Russellville.

Burial will be in Spring Garden Cemetery.

The family would like to especially thank all the caregivers and staff at The Timbers Assisted Living facility in Holts Summit and Hospice Commpassus for the love they showed to Imogene.

Those wishing to send condolences to the family may do so at the www.scrivnermorrowrussellville.com website.
To send flowers to the family in memory of Ellen Imogene Baysinger, please visit our flower store.