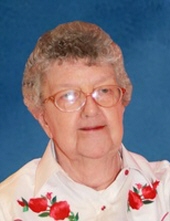 She was born May 9, 1934, in Centertown, Missouri, the daughter of the late Lawrence “Bud” and Frances (Miller) Wekamp.

She was united in marriage on December 21, 1950, in Jefferson City, to Kenneth Eugene Walters who preceded her in death on September 23, 1979.

Betty was a devoted and loving wife to Kenneth. She traveled across the country with him during his 20 years of services in the United States Army. She also was a caring and nurturing mother to her four children.

She enjoyed puzzles, sewing clothes and other items for her children, and making quilts for all her grandchildren.

She was preceded in death by her parents; her husband; an infant son; and a sister.

A prayer service will be held at 1 p.m. Saturday, January 13, 2018, at Scrivner-Morrow Funeral Homes in Russellville with Rev. Alan Earls officiating.

Burial will be in Elston Cemetery.

Scrivner-Morrow Funeral Homes in Russellville is in charge of the arrangements.
To send flowers to the family in memory of Elizabeth Louise Walters, please visit our flower store.