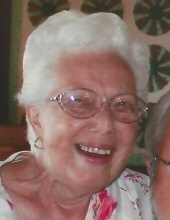 She was born on January 7, 1930, in Syracuse, Missouri, the daughter of the late Anthony and Mildred Monks Hickman.

A 1948 graduate of Paseo High School in Kansas City, Mrs. Miller was employed in earlier years as a comptometer operator with Mobil Oil Company and as a sales clerk with Minnesota Fabrics in Mount Prospect, Illinois. Following the birth of her children, she greatly enjoyed being a devoted wife and homemaker.

She was a federally licensed General Class amateur radio operator holding call sign NØHKM and member of the American Radio Relay League. She was a fifty-year member of Sunflower Chapter, Order of Eastern Star, in Topeka, Kansas. An excellent seamstress, she enjoyed china painting, reading, knitting, crocheting, and cooking. Together with her husband, she had circumnavigated the world twice.

She was of the Baptist faith.

She was preceded in death by one sister, Patricia Jaworski.

Funeral services will be held at 1 p.m. on Saturday, April 20, 2019, at Dulle-Trimble Funeral Home with the Reverend Dr. Doyle M. Sager officiating.

Burial will be in Busby Cemetery, Newtown, Missouri.

Visitation will be 12 noon until time of the service.

Those wishing to email tributes or condolences to the family may do so at the www.dulletrimble.com website.
To send flowers to the family in memory of Elizabeth Lois Miller, please visit our flower store.