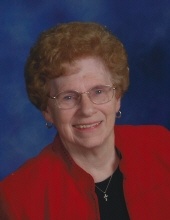 Elizabeth Ann “Betty” Welch, 88, of Jefferson City, passed away on Monday, July 1, 2019, at home surrounded by her loving family.

She was born November 16, 1930, in Jefferson City, the daughter of the late John and Hilda (Bernskoetter) Cortvrient.

Betty worked for International Shoe Company before deciding to stay at home and raise her children. She was an avid St. Louis Cardinals fan, enjoyed gardening, cooking and participating in a competitive card or Yahtzee game. But most of all, she cherished her time with family.

A woman of great faith, she was a member of the Cathedral of St. Joseph and the Ladies Sodality. Betty devoted time and talent, and gave unselfishly of her life to family, friends, church and community. Her love was deep, unconditional and genuine. She raised a family full of love and respect, teaching by example, and always with a smile.

Visitation will be 4-7 p.m. Friday, July 5, 2019, at Dulle-Trimble Funeral Home in Jefferson City with a prayer service at 3:15 p.m. Mass of Christian Burial will be 10 a.m. Saturday at the Cathedral of St. Joseph with the Rev. Stephen Jones officiating. Entombment will be in Resurrection Mausoleum.

Memorials are suggested to Hospice Compassus or to the Cathedral of St. Joseph.

Those wishing to email tributes or condolences to the family may do so at www.dulletrimble.com.
To send flowers to the family in memory of Elizabeth Ann "Betty" Welch, please visit our flower store.