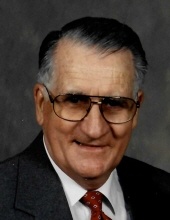 He was born July 18, 1925, in Farmington, Kentucky, the son of the late James Edward and Mollie Rena (Wallis) West.

Edward was a graduate of Farmington High School and attended Sanford-Brown Business College.

He served his country in the United States Army as a sergeant during World War II.

He was united in marriage on August 26, 1944, in Hopkinsville, Kentucky to Joyce Mae Hill who survives.

Edward worked for McDonnell-Douglas as a Senior Planner for over 33 years.

He was a member of Russellville Baptist Church. In his spare time he enjoyed woodworking.

Visitation will be 4-6 p.m. Sunday, December 1, 2019, at Scrivner-Morrow Funeral Home in Russellville.

Burial with military honors will be in Enloe Cemetery.

Scrivner-Morrow Funeral Homes in Russellville is in charge of the arrangements.
To send flowers to the family in memory of Edward West, Jr., please visit our flower store.