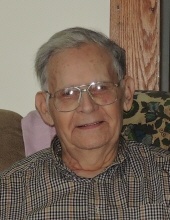 He was born April 5, 1921, in Hartsburg, the son of the late George and Nettie Ballard.

He was a 1940 graduate of Jefferson City High School.

Edward was united in marriage to Norma LaVern Stevens who preceded him in death in 1988.

In September of 1941, Edward started his service with the United States Army lasting nearly 4 years during World War II. He mostly served as a mechanic in the South Pacific region for 2 ½ years.

Before and after his military service, Edward worked for the M-K-T Railroad. He owned and operated a grain elevator in Hartsburg from 1946-1964. Later Edward went to work in Jefferson City for Montgomery Ward, Sears, and Schnucks Grocery Store. He retired in 2006 at the age of 85, due to health reasons.

Edward was a member of Mt. Pleasant Baptist Church in Hartsburg. He was a devout Christian with a kind heart. He was always willing to help anyone that he could. Edward had many hobbies, especially his knack and talent for making beautiful Grandfather clocks.

A graveside service will be held at 10 a.m. Saturday February 20, 2021, at Enloe Cemetery in Russellville with Rev. Don Snyder officiating.

Burial with military honors will follow at Enloe Cemetery where he will be laid to rest next to his wife of 36 years.

Edward requested no flowers please. God bless you all!!

Those wishing to send condolences to the family may do so at the www.scrivnermorrowrussellville.com website.
To send flowers to the family in memory of Edward Waldo Ballard, please visit our flower store.