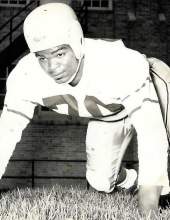 Edward Romain Wilkerson, 86, of Jefferson City, passed away Sunday, June 6, 2021, at his residence.

He was born February 18, 1935, in Sheridan, Wyoming, the son of the late Raymond Golden and Beatrice Thelma (Picket) Wilkerson.

A 1954 graduate of Sheridan High School, Sheridan, Wyoming, Edward received a Bachelor of Science Degree in Physical Education from the University of Northern Colorado and a Masters in Guidance and Counseling from Lincoln University.

Edward served his country in the United States Army.

He was united in marriage in March of 1961, in Washington D.C. to Judith Anne Yager who survives at the home.

In 1962, Edward began his career at Lincoln University as the Recreation Director, retiring as the Director of Student Services and Auxiliary Enterprises.

Edward was a star football player in high school and college. He was on the Wyoming State Championship Team during high school and received All-State honors. During his college years, he was an All-American Honorable Mention for Small Colleges.

He was a member of Alpha Phi Alpha Fraternity and a former member of Jefferson City Jaycees. He was an avid fisherman and enjoyed growing tomatoes.

Those wishing to send condolences to the family may do so at the www.dulletrimble.com website.
To send flowers to the family in memory of Edward Romain Wilkerson, please visit our flower store.