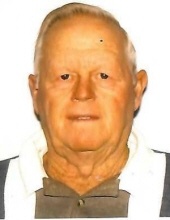 He was born March 5, 1932, in Meta, Missouri, the son of the late Henry and Agnes Regina (Groner) Lueckenotto.

Edmund served in the United States Army during the Korean Conflict from 1952-1954. He was transported to Korea on a ship that took two weeks both ways. Once he arrived, he served as a radio telephone operator for a field artillery unit. Edmund was a proud Honor Flight recipient in 2014.

He was united in marriage on October 26, 1963, at Holy Family Catholic Church in Freeburg to Arline Marie Struemph who survives at the home.

Edmund worked for DeLong’s Inc. for over 10 years and for the U.S. Postal Service as a city letter carrier for 28 years.

Edmund’s favorite times were with his wife and family. In 1972, they purchased a cabin on the Osage River and had many happy days fishing/trotlining and playing horseshoes. One day, he caught a 40-pound catfish and proudly shared his giant fish with friends up and down the river. He was well known in his family for some of the best barbequing around, tastiest fish fries, and making homemade wine. He enjoyed traveling with his wife, bowling, and gardening. He took golf lessons after retiring and played nearly every day. In addition, he was an avid St. Louis Cardinals and Kansas City Chiefs fan.

Mass of Christian Burial will be held at 10 a.m. Friday, June 4, 2021, at Immaculate Conception Catholic Church with the Rev. Donald Antweiler officiating.

Entombment with military honors will be in Hawthorn Memorial Gardens Mausoleum.

Those wishing to send condolences to the family may do so at the www.dulletrimble.com website.
To send flowers to the family in memory of Edmund Simon Lueckenotto, please visit our flower store.