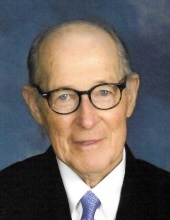 Dr. Thomas Charles Hartman, 88, of Jefferson City, passed away Sunday, August 1, 2021, at his residence with his family at his side.

He was born February 4, 1933, in St. Joseph, MO the son of Charles A. and Lois Virginia (Ferguson) Hartman.

Dr. Hartman was a 1951 graduate of Topeka High School in Topeka, Kansas. He received a Bachelor of Arts Degree in 1955 from the Bob Jones University in Greenville, South Carolina, a Master’s Degree in Biblical Studies in 1957; and a PhD in 1961. In 1967, he received a second PhD in Mediterranean Studies from Brandeis University in Waltham, Massachusetts.

He was united in marriage on April 25, 1992, in Duluth, Minnesota to Claudia E Johnson who survives at the home.

Dr. Hartman was a professor of history, Chairman of the Department of History, and Dean of Humanities and Social
Sciences at the University of Wisconsin for twenty-seven years, retiring in May 1995.

As a lifelong student, he had a love for knowledge especially about the Bible. Through his years of study, he could read
thirteen different ancient languages.

He was a member of St. Martin Catholic Church.

He was preceded in death by his parents and sister, Phyllis Taylor.

Those wishing to send condolences to the family may do so at the www.dulletrimble.com website.
To send flowers to the family in memory of Dr. Thomas Charles Hartman, please visit our flower store.