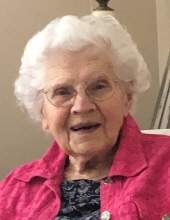 Dorothy was a 1939 graduate of Hutchinson High School in Hutchinson, Kansas and took a few courses at Lincoln University.

Dorothy helped with the family’s ice cream parlor and joined a USO chapter to help entertain troops by hosting dances at a Naval Air Base south of Hutchison, Kansas. There she met her future husband, Carl and soon began a marital union that lasted sixty-three years.

Dorothy worked for the State of Missouri Employment Security from 1971-1983 as a secretary.

She was a member of First Methodist Church, the Young Mother’s Circle, and United Methodist Women; the Association of Retired Missouri State Employees (ARMSE) and the American Red Cross.

Dorothy was a kind and caring woman. She enjoyed quilting with the ladies at the First Methodist Church, China painting, gardening, jigsaw puzzles and was a daily walker. At Oak Tree Villa, the staff purchased a Fitbit for her to wear for her daily walks around the property. At the age of ninety-five, Dorothy won the 2016 District Miss Missouri Nursing Home Pageant and went on to be fourth place at the Missouri Health Care Association Miss Missouri Nursing Home Pageant.

She was preceded in death by her husband, Carl; a daughter-n-law, Patricia Strader; a grandson, Michael Strader; and a sister, Marjorie Robertson.

Memorials are suggested to the Alzheimer’s Association or to the First United Methodist Church.

To send flowers to the family in memory of Dorothy Velma Strader, please visit our flower store.