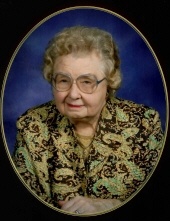 She was born on April 12, 1925, in Kansas City, Missouri, the daughter of the late Ludwig Mischlich and Dorothy Effie Schollmeyer Mischlich.

A 1943 graduate of North Kansas City High School, Mrs. Witthar was employed with McFarland & Edsel Attorney-at-Law, Kansas City, from 1943 to 1958; and with Employers Reinsurance Corporation from 1958 to 1968.

While in Kansas City she belonged to the Redemptorist Club and was a volunteer with St. Anthony Orphanage.

After moving to Jefferson City in 1968, she was a faithful member of St. Joseph Cathedral where she was active in organizing church dinners and coordinated the crafts booth at the church’s annual Christmas Bazaar.

She was especially interested in photography and enjoyed being the family’s official photographer. Her greatest passion being her family, she never missed a birthday by sending cards bearing handwritten notes of love and affection.

She was preceded in death by two brothers, Frank Mischlich and Howard Mischlich.

Visitation will be 4-6 p.m. Monday, March 2nd, at Dulle-Trimble Funeral Home with a prayer service at 3:30 p.m.

Mass of Christian Burial will be held at 9:30 a.m. Tuesday, March 3, 2020, at the Cathedral of Saint Joseph with the Rev. Louis Nelen officiating.

Burial will be in Mount Olivet Cemetery, Raytown, Missouri.

Those wishing to send tributes or condolences may do so at the www.dulletrimble.com website.
To send flowers to the family in memory of Dorothy Marie Witthar, please visit our flower store.