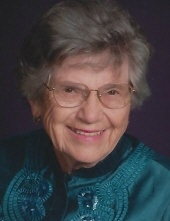 Dorothy was born February 8, 1932, in Fortuna, Missouri, the daughter of the late Oscar Fredrick and Charlotta Harriet (Thompson) Kueffer.

She was married on November 1, 1952, in California, Missouri to Sam Leonard Bower, who preceded her in death in April, 1991. On March 5, 2001, she married Rudolf Michael Lemke who survives at the home.

A 1950 graduate of Tipton High School, Dorothy trained as a cosmetologist and later as an optician in Chillicothe, Missouri. She opened and operated Classic Optical in Jefferson City until she retired in 1997.

She was a member of the Cathedral of St. Joseph. Dorothy enjoyed all types of activities including sewing, crocheting, upholstering, and gardening. She loved volunteering at the Salvation Army.

Dorothy’s greatest life achievement was proving that one woman can make a lasting difference to thousands of people in the Yucatan Peninsula of Mexico. She first visited the area in 1982 to view the ancient ruins but fell in love with the people, many of whom she found were in need of eyeglasses. In subsequent trips she brought used glasses that clients had left at her store and began distributing them in the poor Mayan villages.

She was preceded in death by her parents; her first husband, Sam; a young sister, Emma Kueffer; and sister, Mary Elizabeth Jones.

Mass of Christian Burial will be 10 a.m., Wednesday, May 29, 2019, at the Cathedral of St. Joseph, with the Rev. Fred Elskamp officiating.

Those wishing to email tributes or condolences to the family may do so at the www.dulletrimble.com website.
To send flowers to the family in memory of Dorothy Deane Bower Lemke, please visit our flower store.