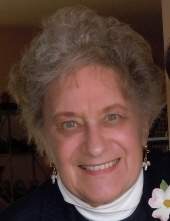 She was born on April 5, 1935, in Cook County, the daughter of George Laverne and Ethel Louise (Talbott) Ifland.

Over her career, Doris worked for the Missouri Department of Revenue; Milo Walz; and Camelot Gifts.

She was preceded in death by her parents; husband, Clifford; daughter-in-law, Jean Olsen; a grandson, Toby Olsen; and a sister, Shirley Haile.

A Memorial service will be 11 a.m. Saturday, February 2, 2019, at Wesley Methodist Church with the Rev. John Kerr officiating.

Memorials are suggested to the Doris Olsen Anniversary Celebration Fund for the upcoming Cole County American 250th Anniversary Commission. She was very involved in 1976 in Russellville and Cole County Bicentennial celebrations and wanted this to be for the 2026 celebration.

Those wishing to email tributes or condolences to the family may do so at the www.dulletrimble.com website.
To send flowers to the family in memory of Doris May Olsen, please visit our flower store.