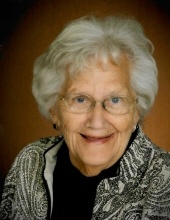 She was born May 21, 1933, in Jefferson City, the daughter of the late Leo George and Matilda (Kroll) Scheuler.

On August 28, 1954, she was united in marriage, at Immaculate Conception Catholic Church in Jefferson City, to Louis Frederick “Louie” Markway who preceded her in death on August 13, 2016.

Doris worked for Stokes Electric, was a bookkeeper for Markway Excavating, and babysat till retirement in her home for many children.

She was an active member of St Stanislaus Catholic Church where she served in many capacities including volunteering for the Catholic Schools, did typing for Nuns at St. Stanislaus, Marriage Encounter, Pre-Marriage Counseling, Public School Religion, and Perpetual Adoration.

In her spare time, Doris helped with her grandchildren and family, was a 4-H leader and was always there at a moment’s notice for anyone. She loved reading, working outside, and playing cards. She loved having her whole family surround her and cooking their favorite foods and meals. She was never happier than when she had a baby in her arms to love.

Mom was known for her devotion to Saints, especially Mary. She often called on them to intercede on her family’s behalf. Doris was a very kind and gentle woman. She always, without exception, was grateful for anything done for her no matter how small. She shared her warm smile with everyone till the day she died.

Visitation will be from 9-11 a.m. Tuesday, February 9, 2021, at St. Stanislaus Catholic Church in Wardsville.

Mass of Christian Burial will be 11 a.m. Tuesday at St. Stanislaus Catholic Church, with the Rev. I.C. Medina officiating. The service will be live streamed for those who wish to watch from home. The link can be found on Doris’s obituary page under Tribute Wall at www.dulletrimble.com.

Entombment will be in St. Stanislaus Mausoleum.

Those wishing to send condolences to the family may do so at the www.dulletrimble.com website.
To send flowers to the family in memory of Doris Lee Markway, please visit our flower store.