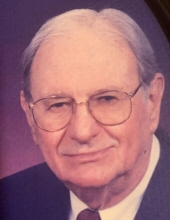 He was born on March 25, 1926, near California, Missouri, the son of Oscar Arthur and Mary Anne (Oesterly) Block.

He was married on September 25, 1954, at St. Stanislaus Church in Wardsville to Bernice Eleanor DeBroeck who preceded him in death on May 19, 2007.

A graduate of California High School, Donald received a Bachelor of Science Degree in Agriculture from the University of Missouri.

He served his country as a sergeant with the United States Army on the 82nd Airborne during World War II.

He worked with the Goodyear and Firestone Rubber Companies, the Missouri Farm Bureau as the manager for Safemark Products and retired from the Missouri Department of Agriculture as an Inspector in the Division of Weights and Measures. He also enjoyed working on his farms raising cattle.

He was a member of the Cathedral of St. Joseph and the Missouri Cattlemen’s Association.

He was preceded in death by his parents, his wife, Bernice, a sister, Esther Marie Block and an infant sister, Kathryn Laverne Block.

Memorials are suggested to Helias Catholic High School Foundation or to the Cathedral of St. Joseph.

Those wishing to send condolences to the family may do so at the www.dulletrimble.com website.
To send flowers to the family in memory of Donald Oscar Block, please visit our flower store.