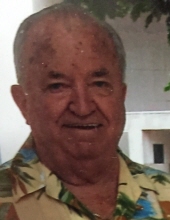 He was born August 19, 1931, in Harrisonville, Missouri, the son of the late Bert and Ada (Luper) Jones.

Don was a 1949 graduate of Jefferson City High School.

He was united in marriage on Janaury 7, 1950, at St. Peter Catholic Church in Jefferson City, to Mary Ann Upschulte who preceded him in death on July 4, 2015.

Don worked in sales with insurance and real estate with his last few working years with Western Catholic Union.

He was a member of St. Peter Catholic Church, American Legion, and the Elks Lodge.

Don was an avid Kansas City Chiefs fan, enjoyed going fishing, and never met a stranger. Many will remember him as “Don Juan” the man wearing a Hawaiian shirt drinking coffee at McDonald’s in Wal-Mart.

He was preceded in death by his parents his wife; one daughter, Donna Etter; and two brothers, John D. and Edgar Jones.

Funeral Service will be 12:30 p.m. Saturday at Dulle-Trimble Funeral Home with the Rev. Charles Pardee officiating.

Memorials are suggested to SSM Health at Home Hospice.

Those wishing to email tributes or condolences to the family may do so at the www.dulletrimble.com website.
To send flowers to the family in memory of Donald Lee Jones, please visit our flower store.