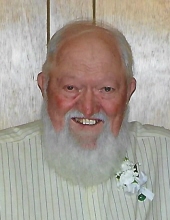 He was born in Russellville on September 18, 1937, to Arthur M.C. and Ruth Ida (Goldammer) Jungmeyer.

On July 12, 1958, he was united in marriage to Berniece Raithel at Trinity Lutheran Church in Russellville. In July of 2018, they celebrated their 60th anniversary with family and friends.

Don graduated from Russellville High School in 1955. During his high school years and following he worked for his father doing carpentry work. After his father’s retirement, he bought the local tavern (D.J.’s Tavern) which he owned for three years. In 1984, he and his wife Berniece, established the Jungmeyer Grocery Store which continued until 2002 when he had some health issues. At the time of his death he was employed as a School Crossing Guard for the Russellville School system, which he had held for 15 years.

He was a past member of the Lion’s Club for many years and had worked on the Engine Show. He was a member of the Human Development Corp in 1976 and served on the Russellville City Council for over 27 years.

Don was a faithful member of Trinity Lutheran Church where he served on the church council and head usher for several years.

He enjoyed Gospel music, watching the St. Louis Cardinals and the Kansas City Chiefs games, and spending time with his family.

He was preceded in death by his parents; one daughter, Diane Ruth Jungmeyer; two brothers-in-law, Bill Enloe and Jerry Toebben; two sister-in-laws, Carol Jungmeyer and Evelyn Carlos; mother and father-in-law, Ella and Adolph Raithel; and his best friend and uncle, Palmer Goldammer.

Visitation will be 2-5 p.m. Sunday, January 20, 2019, at Scrivner-Morrow Funeral Homes in Russellville.

Funeral service will be 11 a.m. Monday, at Trinity Lutheran Church in Russellville with Pastor Ed Merckel and Bill Ferretti officiating.

Burial will be in Trinity Lutheran Church Cemetery.

Those wishing to send condolences to the family may do so at the www.scrivnermorrowrussellville.com website.
To send flowers to the family in memory of Donald Jungmeyer, please visit our flower store.