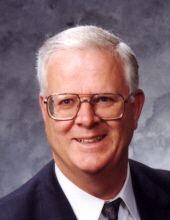 He was born February 28, 1938, in Millsap, Texas, the son of the late William Herman and Willie Bertha (Brock) Moore. He was one of the younger siblings in a large, close-knit family.

Dick was a 1956 graduate of Rogers High School, after which he enlisted to serve his country in the United States Marine Corps. One time when he was on leave, he visited his older brother W.H. in the tiny town of Silex, MO. In his handsome uniform, he caught the eye of Jeanie Maxine Pool, the pastor’s daughter.

Dick and Jeanie were sweethearts from that time on and were united in marriage on September 21, 1958. His heart was broken when Jeanie preceded him in death on January 12, 2021, but he held firm in his faith that he would see her again one day.

After marrying and starting their family, Dick took the bold step to continue his education, and in 1968 he graduated from Evangel College with a Bachelors degree in Psychology. Dick was hired as a parole officer by the Missouri Division of Probation and Parole. After many years of service as a member and subsequent chairman of the Missouri Parole Board under Governor Kit Bond, Dick was appointed by Governor John Ashcroft to be Director of the Missouri Department of Corrections in 1985 and served in that role until retiring from government work in February 1993. In his role as part of the Ashcroft cabinet, he was known for working with both political parties to maintain justice and reform in the State of Missouri. After he retired from state government, Dick turned his focus to working with his wife Jeanie in the operations of Modern Litho-Print Company, which they had purchased in late 1993. He retired from Modern Litho in 2008.

Dick was a lifelong learner, and in 1977 he graduated from Central Missouri State University with a Masters degree in Criminal Justice Administration. During the time he was studying for his Masters degree, he was determined to always have the highest grades in order to be a good example for his kids. He was sometimes found on a Saturday afternoon asleep on the sofa with a sheaf of 3x5 cards with class notes held in his hand. That “learning” part of his personality meant that he was always quick to adopt new technology, and was the first in his family to purchase an iPhone. In recent years, “Alexa” was at his beck and call.

Throughout his life, Dick never missed an opportunity to show his love for family members near and far. Over the years, Moore family reunions were legendary events where the siblings told stories and roared with laughter. Babies were passed around (and kissed), and the little kids fell into bed exhausted from running around with their cousins. Reunions included a church service with two or three (or more) pews filled with family members. One pastor always made the joke “We thank the Lord for ever’ Moore!”

He was a faithful member of First Assembly of God in Jefferson City, and attended LIFE Church of Fruitland, FL, whenever he was staying near there. Dick was particularly led to support foreign missions and the establishment of libraries in Bible schools and seminaries. He also enjoyed golfing, woodworking and vacations with his family. He cheered for the Cardinals, even during bad seasons.

He was preceded in death by his parents; his wife, Jeanie Moore; and his siblings W.H. Moore, Paul Moore, Clyde Moore, John Moore, Gloria Layton, Judy Moore, and Joan Donahoe.

Private family service will be held at First Assembly of God Church with Rev. Lowell Perkins officiating on Thursday, August 12, 2021, at 11 a.m. The church will live-stream the service on its website at www.firstassembly.org.

In lieu of flowers, memorials are suggested to Convoy of Hope (www.convoyofhope.org) or Prison Fellowship International (www.prisonfellowship.org).

Those wishing to send condolences to the family may do so at the www.dulletrimble.com website.
To send flowers to the family in memory of Dick Daryl Moore, please visit our flower store.