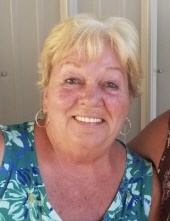 She was born June 22, 1953, in Boonville, Missouri, the daughter of the late Billie Jim and Maxine Bonnadell (Simmers) Scrivner.

Diana loved being with her family, the church, and her dog, “Haus”. She also loved to play bingo. She enjoyed garage sales, cooking and eating Mexican food.

She was preceded in death by her parents; and two brothers, Doris Earl Scrivner and Garry Lee Scrivner.

A Celebration of Life service will be held 10 a.m. Saturday, June 8, 2019, at the Jefferson City Church of the Nazarene with Pastor Wes Phillips officiating.

Memorials are suggested to Relay for Life.

Those wishing to email tributes or condolences to the family may do so at the www.dulletrimble.com website.
To send flowers to the family in memory of Diana Lynn Arnold, please visit our flower store.

Jefferson City Church Of The Nazarene