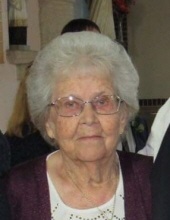 Delphine was born September 22, 1927, in St. Thomas, the daughter of the late Albert and Mary Martha (Twehaus) Monat.

She was a member of the St. Stanislaus Catholic Church in Wardsville. Delphine was blessed with many talents. She was a gifted seamstress, sewing clothes for her family and friends. She also made many beautiful quilts and crocheted afghans. An avid gardener, she grew and preserved fruits and vegetables from her garden.

Delphine cared for many children throughout her lifetime, including her grandchildren. She spent many hours playing cards and Rummikub with her children and grandchildren.

Delphine attended St. Thomas Grade School graduating from the 8th grade. As a teenager she worked in the Ball factory in St. Thomas and then worked in Jefferson City at Woolworth’s Department Store and Tweedie Shoe Factory. Later she worked at the International Shoe Company for several years.

Visitation will be at the St. Stanislaus Catholic Church in Wardsville from 10 a.m. to 12 p.m. Monday, November 30th.

Mass of Christian Burial will follow at 12 p.m. with the Rev. Ignatius Medina officiating.

Burial will be in the St. Stanislaus Catholic Cemetery.

Those wishing to email tributes or condolences to the family may do so at the www.dulletrimble.com website.
To send flowers to the family in memory of Delphine Therese Monat Tappel Wieberg, please visit our flower store.