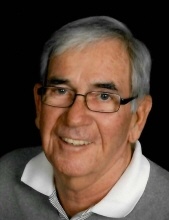 Dean was born on March 13, 1940 in La Porte City, Iowa. His parents, Emma (Hart) and Donald Burrows preceded him in death.

He graduated from La Porte City High School in 1958, and Iowa State University in 1962.

The first portion of Dean’s professional career consisted of sales positions with several feed companies in Iowa. During this time, Dean and Judy lived in Le Mars, Carrol, and Spencer, IA and Maryville, MO. Dean then found his real career passion with Pfizer Animal Health and excelled in various sales roles for 20 years until his retirement in 1999.

By then, Dean, Judy and their family were in Jefferson City, MO where he and Judy have resided for the last 40 years. He was a member of the Cathedral of St. Joseph.

In Dean’s retirement years he enjoyed cheering on Mizzou and the Cardinals, annual golf trips with his buddies, his Lake of the Ozarks Duckhead Townhome friends, and holidays & vacations with family.

He was extremely proud of his children. He loved keeping up with Cindy, Chris & Carrie’s lives and accomplishments. Their greatest accomplishments in his eyes were his grandchildren. He doted on his grandkids and reveled in their success. Tyler, Hollie, Maddie, Logan, Josh & Gavin, Papa loved you guys so much!

He was preceded in death by his brother-in-law, James Bowman.

Private family services will be held at Dulle-Trimble Funeral Home.

Entombment will be in Resurrection Cemetery.

Those wishing to send condolences to the family may do so at the www.dulletrimble.com website.
To send flowers to the family in memory of Dean E. Burrows, please visit our flower store.