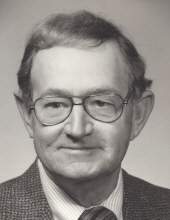 He was united in marriage to Bette Roxanne Cochrane of Lincoln, NE in 1944. They celebrated 66 years together.

Murph was a part-time employee of Nebraska Department of Conservation 1947-1949. He was employed in 1951 as a Deer Research Biologist by the Missouri Department of Conservation in Columbia. He worked on nearly all phases of biology and management of white tail deer, with special interest in disease, nutrition, and range analysis. He was promoted to Superintendent of Game Management in 1969, became Assistant Chief of the Wildlife Division in 1971, and Chief of the Wildlife Division in 1977.

Murph was a devoted tennis player and played daily for many, many years. He played his final game at the age of 86.

Murph amassed a large collection of antique Made in Missouri Fishing Lures. This collection he donated to the Missouri Conservation Commission for display at the Runge Nature Center in Jefferson City and several other CC Stations around Missouri. Murph researched, wrote, and published two editions of a book called “Fishing Tackle Made in Missouri.”

He was preceded in death by a grandson, Michael Murphy.

Visitation will be 1-3 p.m. Saturday, January 5, 2019, at Dulle-Trimble Funeral Home in Jefferson City.

Those wishing to send condolences to the family may do so at the www.dulletrimble.com website.
To send flowers to the family in memory of Dean Allen Murphy, please visit our flower store.