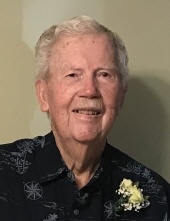 He was born on October 3, 1925, in Illinois, the son of Maple Monroe and Ruby Rosina (Klingeman) Masterson.

David served his country with the United States Army, stationed in Los Alamos.

He was united in marriage on July 23, 1949, in Piggot, Arkansas to Alma Edna Skyles who resides at the home. They had just celebrated their 71st wedding anniversary.

He began working as an elementary school teacher in a one-room schoolhouse where he taught all eight grades for one year. David then worked for the International Shoe Company in several capacities in St. Louis, Washington, Missouri, and finally in Jefferson City, where he retired.

He was a member of the American Legion and International Order of Odd Fellows. David was an avid sports fan. He loved watching the St. Louis Cardinals. He enjoyed traveling and going on bus trips throughout the United States and Canada with his wife for many years.

A private family service will be held.

Those wishing to send condolences to the family may do so at the www.dulletrimble.com website.
To send flowers to the family in memory of David Wilson Masterson, please visit our flower store.