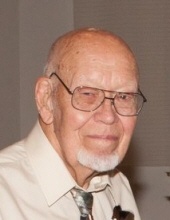 He was born August 18, 1929, in Jefferson City, the son of the late Alvin and Alvina (Hopen) Rackers.

After graduation, David joined the United States Army and served in Korea from 1951-1953. He was awarded the Bronze Star and a Purple Heart.

He was united in marriage on June 9, 1956, in Westphalia, to Ann G. Holterman who survives at the home.

David worked with his father at AJ Rackers Heating and Cooling, was an instructor at Nichols Career Center from 1976-1987, was a school bus manager and driver, and was a driver for Carroll Rehma Motors.

He was a member of St. Francis Xavier Catholic Church in Taos, served on the first Blair Oaks School Board, and was a founding member and volunteer firefighter with the Taos Fire Department. He enjoyed trout fishing and collecting antique items especially toy pedal tractors.

He was preceded in death by his parents; one sister, Virginia Prenger; and four brothers-in-law, Leonard Wolken, Herb Haaf, Bill McClain, and Leo Prenger.

Mass of Christian Burial will be 10 a.m. Saturday at St. Francis Xavier Catholic Church in Taos with the Rev. Michael W. Penn officiating.

Memorials are suggested to the church for future improvements.

Those wishing to send condolences to the family may do so at the www.dulletrimble.com website.
To send flowers to the family in memory of David Leo Rackers, please visit our flower store.