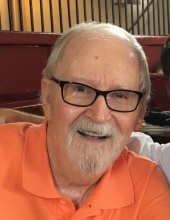 Dick was born March 24, 1938, in Hannibal, Missouri, the son of the late Joseph Cannon and Rachael Lee (Hamilton) Omer. He grew up in Fayette, Missouri, with his sisters Margaret and Betty.

He graduated from Fayette High School where he was a standout athlete in basketball, baseball, and track. He then attended Central College in Fayette where he received his bachelor’s degree. He later earned his master’s degree in counseling from Truman State University in Kirksville, Missouri.

He served his country in the United States Navy from 1960-1962. He was a computer operator stationed at the naval base in San Diego California.

Following his honorable discharge from the Navy, the married couple moved back to Missouri where Dick began working for State Farm in Columbia as a computer operator. In 1964, he became the high school basketball coach in Madison, Missouri, until 1969. He turned the basketball program around culminating in a 20-win season. During this time, Dick and Kay had 3 children: Danny, Greg, and Kari. The family then moved to Salisbury, Missouri, where Dick worked for the Salisbury School District as a guidance counselor and assistant basketball coach until 1976.

From 1976-1979 he worked in Chillicothe, Missouri, as a counselor for the Missouri State Vocational Rehabilitation District Office for special needs adults. The family moved in 1979 to Jefferson City where Dick worked for the Missouri Department of Elementary and Secondary Education in the Vocational Education -- Special Needs and Guidance Services unit until his retirement in 1999.

Dick enjoyed a wonderful marriage for over 55 years prior to the passing of his beloved wife, Lonnie Kay in 2016.

He was a member of First Christian Church in Fayette and attended Community Christian Church in Jefferson City. In his retirement, Dick served as a tour guide at the Missouri State Capitol. He was a member of the American Legion and the Masonic Lodge. He was also a proud St. Louis Cardinals baseball fan for his entire life. Dick was devoted and passionate about his family, and he sacrificed throughout his life so that his kids would have good educations and opportunities for success. He was also a loving grandfather for his 8 grandchildren, whom he adored.

He was preceded in death by his parents; wife; and a sister, Betty Estes.

Family and friend are invited to attend the services while following social distancing guidelines. Facial coverings are required while in attendance.

However, those who are concerned due to the current COVID-19 pandemic, are encouraged to stay home and remember the family in spirit. The service will be live streamed for those who wish to watch from home. The link can be found on Dick’s obituary page under Tribute Wall at www.dulletrimble.com.

Graveside service with military honors will be 2:30 p.m. Saturday at Center Cemetery in Center, Missouri.

Memorials are suggested to the National Multiple Sclerosis Society or to the American Cancer Society.

Those wishing to send condolences to the family may do so at the www.dulletrimble.com website.
To send flowers to the family in memory of Daniel Richard "Dick" Omer, please visit our flower store.