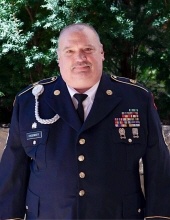 He was born January 28, 1971 in Rolla to the late William and Catherine (Tappel) Hagenhoff. Dale grew up in Rolla and graduated from Rolla Senior High School. He was a veteran of the U.S. Army serving during Operation Iraqi Freedom. Dale continued his service as a member of the Missouri Army National Guard where he retired after 22 years of military service. He also had been employed at the Harry S. Truman Veteran’s Administration Hospital in Columbia.

In his earlier years, Dale had been a member of the American Legion Post 5. He enjoyed deer hunting, fishing and camping when the kids were younger. Dale was known as a “jack of all trades” and could always come up with a way to fix just about anything.

Visitation will be Thursday, January 20, 2022 from Noon until 2:00 p.m. at the Dulle-Trimble Funeral Home, 3210 N. Ten Mile Dr., Jefferson City. Funeral services will be held at 2:00 p.m. at the funeral home. Reverend Don Fankhauser will officiate. Burial will be in Resurrection Cemetery with full military honors. The service will be live streamed for those who wish to watch from home. The link can be found on Dale's obituary page under tribute wall at www.dulletrimble.com.

In lieu of flowers, memorials may be directed to www.woundedwarriorproject.org.

Those wishing to email condolences may do so at www.dulletrimble.com.
To send flowers to the family in memory of Dale Jerome Hagenhoff, please visit our flower store.