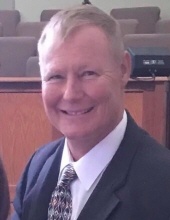 He was born October 1, 1962, in Sweet Springs, Missouri, the son of Marvin and Arleen (Stuenkel) Dittmer.

He was a 1981 graduate of Concordia High School and attended one year at the University of Missouri.

He was united in marriage on March 8, 2003, in Eureka Springs, Arkansas to Ruth Marie Schaefer who survives at the home.

Curt joined the United States Army on February 21, 1985. Following Basic Training, he was stationed in Germany for three years and completed his initial enlistment in Virginia for one year. On September 21, 1989, he enlisted in the Missouri National Guard where he continued to serve with the Senior Automated Logistics NCO with the Missouri Training Site command. Curt was deployed to Iraq on September 19, 2005 and returned home on July 23, 2006. He was awarded two Meritorious Service Medals, six Army Accommodation Medals, thirteen Army Achievements, two Army Good Conduct Medals, Global War on Terrorism Medal, and the Iraqi Campaign Medal. He also worked as an Equipment Specialist in the Surface Maintenance Managers office at the Ike Skelton Training site. After 34 years of service, Curt retired on February 1, 2019.

He was a member of Immanuel Lutheran Church in Honey Creek, a former member of the Elks Lodge, and participated in a dart league.

Anyone that knew Curt, knew his love for life. Spring was for getting the garden planted and each year it seemed to get bigger. Summer was spent at their place on the Osage River. He loved nothing more than to take the boat out, meet up with friends and family and have a few beers, and always grilling up some steaks for dinner. In the fall, Curt enjoyed deer hunting and then Curt and Ruth spent a day each year making deer sausage and sticks. Winter was vacation time, which was always spent in some warm country or on a cruise. He was always up for a game of pitch and he never liked to lose. His love for his family was everything to him. He was so excited about becoming a Grandpa that he even stopped smoking. And his smile would light up a room.

He was preceded in death by his grandparents.

Visitation will be 2-5 p.m. Sunday, at Dulle-Trimble Funeral Home.

Funeral service will be 11 a.m. Monday, at Immanuel Lutheran Church in Honey Creek with the Reverend Dr. Rick Foss officiating.

Burial with military honors will be in Immanuel Lutheran Cemetery.

Memorials are suggested to Capital Projects or to Immanuel Lutheran School.

Those wishing to send condolences to the family may do so at the www.dulletrimble.com website.
To send flowers to the family in memory of Curtis Ray Dittmer, please visit our flower store.