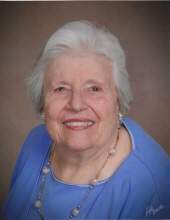 She was born on July 18, 1922, in Green City, Missouri, the daughter of the late Clarence Edwin Walker and Lera B Robinson Walker.

She was a secretary with Jefferson City Public Schools and sold Tupperware products for many years.

A member of First United Methodist Church since 1954, she was past president of the Harmony Sunday School Class; received the Woman of the Year Award from United Methodist Women; was a member of the Ruth Circle, Learning in Retirement, and A.A.R.P.; served as a poll judge; loved to travel; and was a frequent traveler to Europe.

She was a cub scout leader and was proud that both her sons became Eagle Scouts. She was actively involved with the American Red Cross, Meals on Wheels, and organized many blood drives through the years.

Mrs. Shemwell was actively involved with Church World Service, collecting Miles of Pennies and preparing school and health kits for the Festival of Sharing. She was an active supporter of Henderson Settlement in Kentucky, a United Methodist mission to which she made several mission trips. She was active in Women in Development and served three years as Vice-president of the Jefferson City Council of Clubs. She was a member of the Board of Directors of the Senior Nutrition Council for over fifteen years.

She was preceded in death by two sisters, Shirley Ann Wilhite and Marilyn Lee Walker.

Funeral services will be held at 11 a.m. on Saturday, September 15, 2018, at First United Methodist Church with the Rev. Wendell Stoneburner officiating.

Those wishing to send condolences to the family may do so at the www.dulletrimble.com website.
To send flowers to the family in memory of Clarice Marguerite Shemwell, please visit our flower store.