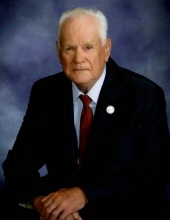 He was born on January 11, 1930 in Meta, Missouri, the son of the late Joseph M. and Katherine J. (Lueckenhoff) Brenneke.

Clarence served in the United States Army during the Korean Conflict in the 23rd infantry.

Clarence worked for thirty-eight years as a heavy equipment operator for Leonard Barnhart Construction. After retirement he did maintenance work for Boggs Steel.

He was a member of Immaculate Conception Catholic Church; the American Legion; and the VFW.

An avid listener of St. Louis Cardinals, Clarence enjoyed being outside cutting grass on his riding lawn mower, fishing, hunting, cutting wood, barbequing, and going to the farm.

Burial will be in Hawthorne Memorial Gardens immediately following the service.

The general public is welcome to attend services while following social distancing guidelines. Facial coverings are required while in attendance.

Those wishing to send condolences to the family may do so at the www.dulletrimble.com website.
To send flowers to the family in memory of Clarence Frank Brenneke, please visit our flower store.