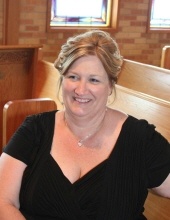 She was born September 10, 1965, in Jefferson City, the daughter of Raymond J. and Virginia Mary (Feltrop) Holtmeyer.

She was a 1983 graduate of Helias High School.

Charlotte was united in marriage on April 20, 1985, at St. Margaret of Antioch Catholic Church in Osage Bend to Gregory George Braun who survives at the home.

Charlotte worked for Farm Bureau Insurance from 1983-1984, Missouri Department of Revenue from 1984 until her retirement in August of 2015. She also helped at St. Stanislaus after-school program from 2015-2018.

She was preceded in death by her infant son, Adam Braun; her infant brother, Thomas Holtmeyer; and her maternal and paternal grandparents.

Mass of Christian Burial will be 10 a.m. Monday, July 29, 2019, at St. Margaret of Antioch Catholic Church with the Rev. I.C. Medina officiating.

Burial will be in St. Margaret Catholic Cemetery.

Those wishing to email condolences to the family may do so at the www.dulletrimble.com website.
To send flowers to the family in memory of Charlotte Ann Braun, please visit our flower store.