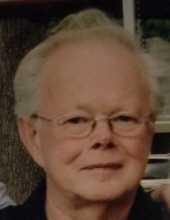 He was born December 25, 1942, in Cole County, Missouri, the son of the late Charles Bernard and Nadine B. (Wilson) Cliburn.

He was a 1960 graduate of Russellville High School.

Dean worked most of his life in construction as a heavy equipment operator and in real estate. He also worked as a private pilot in his earlier years.

He was a member of the American Legion Roscoe Enloe Post 5 and Veterans of Foreign Wars Post 1003 in Jefferson City. In his spare time, he enjoyed farming and his garden.

He was preceded in death by his parents; and a sister, Brenda Scheperle.

A private family visitation and prayer service was held Saturday, March 23rd, at Scrivner-Morrow Funeral Home in Russellville with the Rev. Msgr. Robert A. Kurwicki officiating.

Burial was in Centertown Cemetery.

Scrivner-Morrow Funeral Homes in Russellville was in charge of the arrangements.

Those wishing to send condolences to the family may do so at the www.scrivnermorrowrussellville.com website.
To send flowers to the family in memory of Charles Dean Cliburn, please visit our flower store.