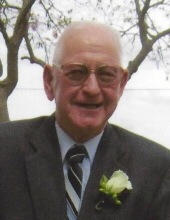 Charles Chris Eichholz, 82, of Westphalia, passed away Thursday, January 3, 2019, at SSM Health St. Mary's Hospital as a result of an automobile accident.

He was born June 5, 1936, in Westphalia, the son of the late Clem and Bernadine (Scheppers) Eichholz.

Charles worked for many years as a car salesman in Linn and Jefferson City. He also worked for the United States Postal Service as a postman on the Star Route.

He was a member of St. Joseph Catholic Church and the Lions Club in Westphalia. He was a former member of the Fraternal Order of Eagles and the Knights of Columbus.

His greatest passion was working on his farm, enjoyed morning coffee with friends and loved going to cattle sales. He enjoyed playing pitch and spending time with family and friends.

He was preceded in death by his parents, his wife, an infant daughter, one son Kenneth Eichholz, four siblings Betty Lepper, Marilyn Linnenbrink, Judy Eichholz, and Stanley Eichholz.

Mass of Christian Burial will be 10:00 a.m. Monday, January 7, 2019, at St. Joseph Catholic Church in Westphalia with the Rev. Daniel J. Merz officiating.

Interment will be in St. Joseph Catholic Cemetery.

Those wishing to email tributes or condolences to the family may do so at the www.dulletrimble.com website.
To send flowers to the family in memory of Charles Chris Eichholz, please visit our flower store.