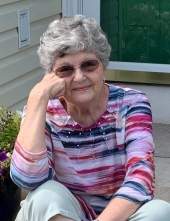 She was born September 28, 1943, in Decatur, Illinois, the daughter of the late George Logan Smith and Mary Frances Burcham Elsea. Her father and step-mother, George and Alvena Smith, raised Carolyn during her younger years.

She was united in marriage on June 17, 1988, in Bridgeton, Missouri to Stanley Joseph Paczkowski who survives at the home.

She attended First Baptist Church and Woodcrest Church in Jefferson City. She enjoyed flower gardening, her pets, and spending time with her grandchildren.

She was preceded in death by her parents; her brother, Bobby Smith; and her grandson, Randy Riley-Chugg.

Memorials are suggested to the American Heart Association or the Jefferson City Animal Shelter.

Those wishing to send condolences to the family may do so at the www.dulletrimble.com website.
To send flowers to the family in memory of Carolyn Lee Paczkowski, please visit our flower store.