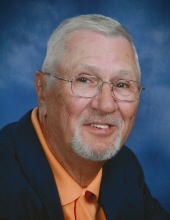 Carl Harper, 81, formerly of Bloomington, IN passed away on Wednesday, October 13, 2021 in Jefferson City, MO.

He was born February 10, 1940, in Youngstown, OH to the late Darrell and Margaret (McHugh) Harper.

Carl grew up in Solsberry, IN and graduated from Solsberry High School in 1957. After graduation, he joined the Navy at the age of 17. For the next 23 years, Carl served his country retiring in 1980 as Master Chief. He proceeded to worked at BF Goodrich and later for the Rogers Group retiring in 2004.

On July 23, 1961, Carl married Patricia Ann Cowden in Bloomington, IN. They had four children, Steven, Paul, Michael, and Victoria. Carl’s career in the Navy took the family throughout the United States.

After his retirement, Carl loved spending time with his family, going out to lunch, playing golf, watching Indiana University and Indianapolis Colt’s games and taking care of his beloved dog Snickers.

Survivors include his children, Dr. Steven (Michelle) of Jefferson City, Michael (Jennifer) of Corydon, IN, Victoria (Lane) Shannon of Dallas, TX, seven grandchildren, three great grandchildren and two sisters, Doris (Dale) Catlett of Mitchell, IN and Kathy (Steve) Jackson of Bloomington, IN. Carl was preceded in death by his wife, Patricia and son, Paul.

In lieu of flowers, memorials can be made to the Alzheimer’s Foundation and/or Friends of Animals animal shelter in Eldon Missouri.

Those wishing to email tributes or condolences to the family may do so at www.dulletrimble.com.
To send flowers to the family in memory of Carl Ernest Harper, please visit our flower store.