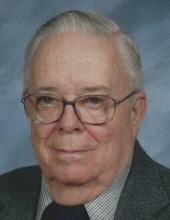 Bryce Alden Hinkson, M.D., age 92, passed away peacefully in the company of family on Friday, December 21, 2018 from complications of Parkinson’s disease at Ozark Rehabilitation and Healthcare Center in Osage Beach, Missouri. Bryce was a man of strong lifelong Christian belief and faith in our Lord and Savior Jesus Christ and the promise of eternal life in Heaven.

Bryce was born on July 14, 1926, on a farm in rural Halstead, Kansas, the son of the late Guy Gittings Hinkson and the late Mary Olive (Turner) Hinkson. He was the youngest of three children joining brother Newton and sister Beth. Bryce’s family later relocated from Halstead to Lawrence, Kansas where he graduated from Liberty Memorial High School in June 1944.

Shortly after high school graduation Bryce enlisted in the United States Navy serving his country for just over two years during World War II and the immediate post-war period. He completed basic training and Electrician’s Mate School at Great Lakes Naval Training Center near Chicago, Illinois before being assigned to active duty in San Francisco and San Diego, California. He served on board USS Radford (DD-446) a Fletcher-class destroyer and USS Siboney (CVE-112) a Commencement Bay-class escort carrier. Bryce served one tour in the western Pacific on USS Siboney and achieved his highest rating of Electrician’s Mate, Third Class (EM3c).

Bryce’s professional interests led him to medical practice primarily in the fields of psychiatry and general medicine. He served many years in civilian public service, first working in the Kansas State Hospital system for approximately seven years. Bryce then served as a physician at United States Veterans Administration (VA) hospitals in Leavenworth, Kansas; Fort Meade, South Dakota; and Poplar Bluff, Missouri. As a VA physician for almost 24 years, Bryce cared for untold numbers of veterans of all branches of the United States military before his retirement from the VA in Poplar Bluff, Missouri in 1988.

Bryce was united in marriage to Bernadine Iva (Roller) Hinkson, who he always lovingly called Ivy, on December 17, 1960 at the First United Methodist Church in Osawatomie, Kansas. Bryce and Ivy initially made their home in Osawatomie followed by moves to family homes in Leavenworth, Kansas; Fort Meade, South Dakota; and Poplar Bluff, Missouri. Bryce and Ivy lived in Poplar Bluff for over 32 years during Bryce’s last years with the VA and in retirement.

Bryce devotedly attended the First Christian Church in Poplar Bluff for over 30 years where he had many friends and where he sang in the church choir. Bryce was a loving and devoted husband and provider to Ivy and a loving and nurturing father and role model to their children Robert Charles Hinkson and Karen Sue Hinkson. Bryce and Ivy were instrumental in assuring Robert’s and Karen’s education and success in their adult lives. Bryce was Robert’s best man when Robert married Rose Mary (King) Hinkson in August 1993. Bryce was a loving father-in-law to Rose and Rose very much loved and adored Bryce in return.

In March 2011, Bryce moved to rural Kaiser, Missouri in the Lake of the Ozarks area where he lived in the home and loving care of his son Robert and daughter-in-law Rose. Bryce was also lovingly cared for at Ozark Rehabilitation and Health Care Center in nearby Osage Beach where he also received hospice care in his final months.

Bryce is survived by his wife of 58 years Iva Hinkson and daughter Karen Sue Hinkson of Arnold, Missouri; son Robert Charles Hinkson and his wife Rose Mary of rural Kaiser, Missouri; grandchildren Sara Smith of Jefferson City, Missouri; Rachel (Smith) Bang and her husband Josh Bang of rural Auxvasse, Missouri; Jonathan Pratt of Fairbanks, Alaska; and Elijah Hinkson and his wife Lillian (Vowels) Hinkson of Jefferson City, Missouri; and three great grandchildren Kayla Bang, Lori Bang, and Aiden Smith. Bryce is also survived by two step children and a step son-in-law and their families, including eight grandchildren, 19 great-grandchildren, and one great-great-granddaughter. Bryce is survived by two nieces, the daughters of his older sister Beth, Gayle Bell-Picco and her husband Tom and Diane (Bell) Viehe all of Portland, Oregon; and cousin Doris (Hinkson) Woolard of Florida, and numerous others in extended family and friends.

Those wishing to send condolences to the family may do so at the www.dulletrimble.com website.
To send flowers to the family in memory of Bryce Alden Hinkson, please visit our flower store.