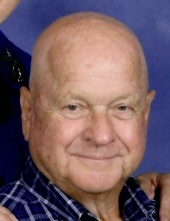 He was born March 26, 1933, in Barnett, Missouri, the son of the late Emmett Everett and Dessie Jane (Phillips) Miller.

A graduate of Eldon High School, Bob received a Bachelor of Science Degree in Agriculture from the University of Missouri.

He served his country in the United States Army for over two years.

On September 1, 1953 he married Barbara Camden. To this marriage, two sons were born. He was united in marriage on June 3, 1983 in Mexico, Missouri to Virginia Lee Roberds who survives at the home.

A farmer all his life, Bob was also an insurance adjustor for several different companies over the years.

Bob’s greatest pleasure in life was his cattle and driving his Allis tractors across his land.

Bob attended Concord Baptist Church. He loved the Lord, his church and his Pastor, Monte Shinkle.

He was preceded in death by his parents; a daughter-in-law, Ginny Miller; a grandson, Gregory W. Roberds, Jr. and a sister and brother-in-law, Norma Jean and Dorsey Howard.

His body was donated to the University of Missouri School of Medicine-Gift of Body Program, Columbia, Missouri.

Celebration of Life will be held in Kentucky at a later date.

Those wishing to send condolences to the family may do so at the www.dulletrimble.com website.
To send flowers to the family in memory of Bobbie Lee Miller, please visit our flower store.