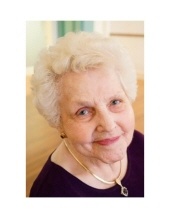 She was born October 5, 1923 in Sheridan, Wyoming, the daughter of the late Sylvester and Louise “Lois” (Backus) Meyer. Due to illness suffered by her birth parents, B.J. was adopted by Grover and Iva Hargrove and raised in Severy and Arkansas City, Kansas. She was able to connect and maintain long lasting ties with her birth relatives and adoptive relatives.

B.J. graduated from Severy High School. She was voted school queen and most likely to succeed in her 1941 high school graduating class. B.J. attended Wichita Business College and perfected her shorthand and typing skills at Adela Hale Business College. Following her graduation from Adela Hale, she became a public stenographer. B.J. took additional courses at the University of Missouri and Lincoln University in Business Law and Accounting.

She was united in marriage on June 27, 1942, at St. Theresa Catholic Church in Hutchinson, Kansas to Frederick Joseph DeLong who preceded her in death on February 15, 1996.

In 1944, B.J. and her husband founded DeLong’s Inc. B.J. ran the office answering the phone, taking orders, doing payroll, and occasionally driving the truck to make local deliveries or pick up supplies. B.J. took a leave of absence to raise their children but remained as corporate secretary for over 50 years and still served on the DeLong’s Incorporated Board of Directors.

B.J. was a member of Immaculate Conception Catholic Church where she had been involved with the I.C. school during her children’s tenure. She was president of the Home and School Association, a den mother and Girl Scout leader. She became a member of the I.C. Circle and a Lady of the Holy Sepulcher.

Her community involvement reflects her father’s words that such service to others builds character and happiness. She gave her time to help create and serve on the first Environmental Quality Commission for Jefferson City, member of the Board of Directors for the Cole County Historical Foundation and was active in the Historic City of Jefferson Organization, St. Mary’s Hospital Auxiliary, Jefferson City Convention and Visitor’s Bureau, served as President of Hawthorn Garden Club, the Jefferson City Country Club Women’s Golf Association, and the Marathon Bridge group.

In 1974, she received the American Association of University Women award for Environmental Improvements and in 2001, the William Quigg Award for Lifetime Leadership. She is a nationally accredited landscape design critic and has used her expertise to help beautify downtown Jefferson City with benches and trees.

In 2004, B.J. received the Hope award from the Historical Society for writing the story of DeLong’s Inc. found in the book “Missouri Crossroads of the Nation.” The Jefferson City Zonta Club presented B.J. with the Lifetime Achievement Award at the 2019 Yellow Rose Luncheon.

B.J. loved her family, friends, and community. She was a role model for many in her family and our community. She stressed the importance of punctuality, honesty, and integrity. Giving back was something she believed in and did. B.J. considered herself the glue that held her family together. She had a resolute love of life. B.J. had many dear friends and had the capacity to make a friend with people of all walks of life from the “get go.”

She was preceded in death by her birth and adoptive parents; her husband, Frederick Joseph DeLong; her sisters, Bernice Hargrove and Jeanette Kelly; and Jim DeLong who was raised by Joe and B.J. from age nine.

Mass of Christian Burial will be 10 a.m. Monday at Immaculate Conception Catholic Church with the Rev. Donald Antweiler officiating. The service will be live streamed for those who wish to watch from home. The link can be found on B.J.’s obituary page under Tribute Wall at www.dulletrimble.com.

Memorials are suggested to the Bicentennial Bridge Project. Checks can be made payable to Jefferson City Parks and Recreation Foundation, 1299 Lafayette Street, Jefferson City, MO 65101 (memo line: Memorial for B.J.).

Those wishing to send condolences to the family may do so at the www.dulletrimble.com website.
To send flowers to the family in memory of Betty Jo DeLong, please visit our flower store.