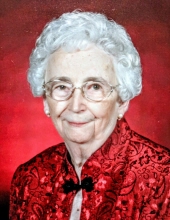 She was born March 8, 1924, in Jefferson City, Missouri, the daughter of the late William Washington Tade and Leta Beatrice (Hees) Bunch.

Betreace was a 1941 graduate of Eldon High School.

She was united in marriage on August 11, 1944, in Jefferson City, to Raymond Harold Barger who preceded her in death on November 23, 2013.

Retiring on January 1, 1987, Betreace worked for sixteen years at Scholastic as an order processing clerk.

She was one of the last two charter members of Memorial Baptist Church. A devout Christian, Betreace was a member and teacher of the Golden Circle Sunday School Class.

Betreace was a beautiful seamstress and enjoyed making quilts. Reading and coloring in color books were also favorite pastimes. In the summer, she loved preparing for family reunions. Betreace cared deeply for her friends and maintained friendships her entire life.

She was preceded in death by her parents; husband; a brother, Rev. Albert Bunch; and two sisters, Dawn Bunch and Eloise Bunch.

Those wishing to email tributes or condolences to the family may do so at the www.dulletrimble.com website.
To send flowers to the family in memory of Betreace Barger, please visit our flower store.