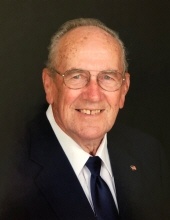 Bernard I. Heet, 94, formerly of Taos, died Thursday, July 2, 2020, at Heisinger Bluffs in Jefferson City surrounded by his family.

He was married on January 28, 1950 at St. Peter Catholic Church in Jefferson City to Laurine Mary Kliethermes who preceded him in death on July 29, 2017. Together they shared sixty-seven years and are now reunited again.

On October 24, 1944, he was inducted into the United States Navy and served as a signal man aboard the submarine chaser USS PC-817 in the Pacific Theater during World War Two. He was honored to have visited Washington, D.C. as a member of the Honor Flight program and to have received the American Legion Quilt of Valor for his years of service to our country.

Bernard returned from the war and went to work for Sexton Ford as their Parts Manager and then on December 16, 1956, went to work for the Missouri State Highway Patrol and retired as Superintendent of Garages on March 1, 1994.

He was known for his smile and joy for life, never questioning or complaining. His answer to life's trials was to "say Hail Marys." He loved his wife, his family, his faith, and the Rosary. He enjoyed sitting on the porch swing listening to his beloved St. Louis Cardinals and watching them on TV. His love for baseball included years of playing and coaching local Taos teams. He loved hunting, fishing, gardening, horseshoes, and pinochle card games -- passions he shared with his children, grandchildren, and great-grandchildren.

Mass of Christian Burial will be 10 a.m. Tuesday, July 7, 2020, at St. Francis Xavier Catholic Church in Taos, with the Rev. Michael Penn officiating. The service will be live streamed for those who wish to watch from home. The link can be found on Bernard’s obituary page at www.dulletrimble.com.

Burial with military honors will be in St. Francis Xavier Catholic Cemetery, Taos.

The general public is welcome to attend the services while following social distancing guidelines and wearing masks when entering and exiting the church. Disposable masks will be provided by Dulle-Trimble Funeral Home if needed.

The family wants to keep everyone safe so has decided not to have a luncheon after the funeral.

Those wishing to email tributes or condolences to the family may do so at the www.dulletrimble.com website.
To send flowers to the family in memory of Bernard I. Heet, please visit our flower store.