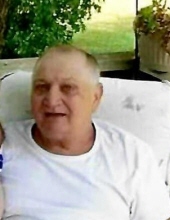 Gene was born January 30, 1948 in Rockford, IL to the late Bernard V. and Nellie H. (Suter) Hale. He grew up in Rockford and later met Patricia Copen. Gene and Patti fell in love and were married in Dixon, IL on May 13, 1967. In 1968, Gene served overseas in the U.S. Army during the Vietnam War. After moving to Jefferson City, Gene was a prison guard at the Renz Farm and later at the Missouri State Penitentiary until his retirement. He was a member of the Disabled American Veterans, American Legion Roscoe Enloe Post 5, VFW Post 2657 in Fulton and a former member of the Fraternal Order of the Eagles, Aerie 2693 in Jefferson City. In his free time, Gene enjoyed taking care of his yard and maintaining his mowers. He loved playing games on the computer, watching wrestling on TV, following the Minnesota Vikings, supporting the casinos and playing his daily “scratcher” tickets.


Dulle-Trimble Funeral Home is in charge of the arrangements.

Those wishing to send condolences to the family may do so at the www.dulletrimble.com website.
To send flowers to the family in memory of Bernard Eugene Hale, please visit our flower store.