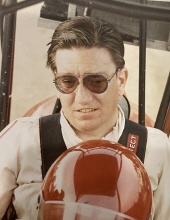 He was born July 23, 1944, in Sedalia, Missouri, the son of the late Bennie Leonard Barber, Sr. and Anna Helen (Maness) Barber.

He was a graduate of Smith Cotton High School in Sedalia and attended Central Missouri State University.

Bennie served his country in the United States Navy during the Vietnam Era.

He was united in marriage on November 7, 1969, in Waukegon, IL to Dixie Lee Barchenger who preceded him in death on February 25, 2000.

Bennie worked as a computer programmer for Missouri Power and Light, University Hospital, Missouri Department of Revenue and retired from the Department of Administration.

He was preceded in death by his parents; his wife, Dixie Barber; and a brother, Danny Barber.

Visitation will be 10-11 a.m. Saturday, April 30, 2022, at Scrivner-Morrow Funeral Homes in Russellville. A graveside service with military honors will follow at Enloe Cemetery.

Scrivner-Morrow Funeral Homes in Russellville is in charge of the arrangements.
To send flowers to the family in memory of Bennie Leonard Barber, Jr., please visit our flower store.