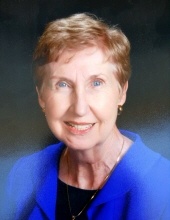 She was born June 29, 1939, in Park, Kansas, the daughter of the late John C. and Agnes Frances (Kuhn) Stegman. She was the youngest of their seven children, and she was known in the family as “Babe.”

She was united in marriage on May 28, 1960, in Goodland, Kansas, to John Robert Swanson who preceded her in death on February 11, 2005. Together they traveled extensively throughout Europe and lived in Beruit, Lebanon for six months.

Barbara grew up in Goodland, Kansas, and graduated from Goodland High School. She worked as a teacher, principal and school administrator. She received her Bachelor’s degree from Marymount College near Salina, Kansas, and she began teaching at Baldwin Elementary School in Baldwin City, Kansas. She later worked at Sacred Heart Parish in Columbia, before taking a teaching position at Immaculate Conception School in Jefferson City.

Barbara spent remainder of her career working for the Diocese of Jefferson City, where she began as a fourth grade teacher at Immaculate Conception School. She always said fourth grade was her favorite grade.

She received her Master’s degree from Lincoln University in Jefferson City, and she advanced in her career to become principal at Immaculate Conception, eventually advancing to become associate superintendent of schools for the Jefferson City Diocese and briefly serving as interim superintendent.

She was very proud of her work in the Catholic schools, which included helping one area parish open a brand new school. She was committed to education, and she continued to work after her retirement as a volunteer tutor for local children. She was extremely active with Immaculate Conception Catholic Church community throughout her years in Jefferson City. She volunteered in many different roles and on a great number of projects within the parish throughout her life.

She also worked in retirement as a docent at the Governor’s Mansion, giving tours to school groups and enjoying learning more herself about the history of the building and the state. She also volunteered her time as an ombudsman through the Missouri Department of Health and Senior Services. She met with residents at nursing homes in Jefferson City, assisting them in improving their care.

Barbara also loved to travel, both before and after her retirement. During her lifetime, she set foot on five of the seven continents, including visits to China, Russia, India, Egypt and Argentina.

Barbara was a proud mother and grandmother, who helped introduce a love of books and reading to her children and grandchildren, who will probably always remember their Grammy best for the time she spent reading to them. She was always reading a new book and enjoyed being a part of different book clubs throughout her life. She treasured her friends, and she was always looking for ways she could help and contribute.

She was preceded in death by her parents; her husband; and her siblings, Viola, Albert, Dorothy, Richard, Herbert, and Caroline.

Mass of Christian Burial will be 11 a.m. Tuesday at Immaculate Conception Catholic Church.

Burial will be in the Goodland Cemetery in Goodland, Kansas, at a later date.

Memorials are suggested to the Alzheimer’s Association and to the Missouri River Regional Library, where Barbara was a frequent patron.

Those wishing to send condolences to the family may do so at the www.dulletrimble.com website.
To send flowers to the family in memory of Barbara Mary Swanson, please visit our flower store.