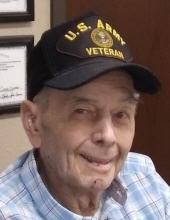 August Casper Wieberg, 85, of Holts Summit passed away on Wednesday, June 1, 2022 at Jefferson City Manor.
Gus was born December 14, 1936 in Argyle to the late August Frank and Hilda (Eichholz) Wieberg. He grew up on the family farm while learning the value of hard work and making sure things were always done right. That hard work carried over into his career with Leonard Barnhart Contractor and later with Mid-America Precast. Gus was a truck driver hauling gravel and helped in whatever concrete work that needed to be done. On May 9, 1964, Gus married the loved of his life, Laura Falter in Freeburg, MO. They celebrated 44 years of marriage before Laura passed away on August 26, 2008.

If you knew Gus, you were a friend for life. He would help wherever needed and many times without being asked. Whether it was going to family reunions, playing ball with his grandson, enjoying bar-b-que lunches, or playing Cutthroat Pitch and Pinochle, Gus loved spending time with his family. In his free time, he could be found outdoors either hunting, fishing, froggin, cutting grass, making firewood or just enjoying a cold beer under a shade tree.

Gus was a devout Catholic and took comfort in going to Mass and praying the Rosary daily. He and Laura were long time members of St. Andrew Catholic Church in Holts Summit, where one of Gus’s jobs was to fry sausage every year for the Fall Suppers.

Memorials may be directed for masses or St. Andrew Church Building Fund.

Online condolences may be shared at www.dulletrimble.com.

To send flowers to the family in memory of August Casper Wieberg, please visit our flower store.