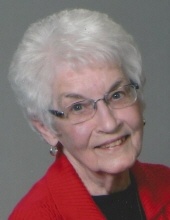 She was born December 24, 1928, in Bonnots Mill, the daughter of Joseph John and Opal Louise (Bonnot) Schmid.

Arbell was a 1945 graduate of Frankenstein High School.

As a young woman, Arbell moved to Jefferson City. After her marriage to Dude she held several jobs, most recently as a secretary in the rectory at Immaculate Conception Catholic Church, while also raising her children.

She was a member of Immaculate Conception Catholic Church and Immaculata Club. Arbell volunteered many years at St. Mary’s Health Center as the front desk receptionist, and at the Samaritan Center. She enjoyed playing games including cards, dominoes, puzzles, and casino trips with her family and friends. She traveled extensively with her husband, Dude, to local and state horseshoe tournaments.

She was preceded in death by her parents; her husband, Dude; a grandson, David William Luna; a brother and his wife, Leonard “Bud” and Carolyn Schmid; two sisters and their husbands, Rose and Bernie Dudenhoeffer, Irene and Ron Muenks; and three brothers-in-law, Louis Bonnot, Richard LeCuru, and Don Gerling.

Those wishing to send condolences to the family may do so at the www.dulletrimble.com website.
To send flowers to the family in memory of Arbell Louise Vogel, please visit our flower store.