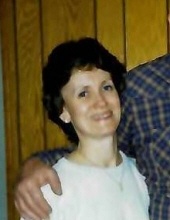 At age 13, Annette was baptized in the Capital City Christian Church.

Annette was an extremely talented artist and sculptor, and pursued her passion for art for another 20 years after receiving her degree, winning numerous awards in local art exhibitions.

On October 25, 1985, Annette married Robert D. “R.D.” Salmons in Miami, Oklahoma and they remained married until Bob’s death in 2014.  “Nettie” and “R.D.” enjoyed traveling out West each year and only gave it up after buying a farm near California, where Bob raised horses and Nettie lovingly tended their menagerie of other farm animals, including burros, goats, llamas, turkeys, geese, guineas, ducks, and chickens.  Nettie also loved her doggies and kitties and had a number of both over the years.

Annette worked at the Farmers Bank of Lohman for 44 years, starting out as a part-time employee at age 16 and retiring as head of the bookkeeping/operations department, as well as  bank Vice President.

Growing up, Annette was a member of Capital City Christian Church in Jefferson City, but in recent years had become a member of the California Church of Christ.

Nettie was known for her lifelong love of and devotion to animals, whether they were her kitties and doggies or her beloved menagerie of farm animals.  She subsequently was a member of a number of animal welfare organizations, including the local, state, and national chapters of the Humane Society, as well the ASPCA, or American Society for the Prevention of Cruelty to Animals.  Annette was also a faithful contributor to the Callaway Hills (No-Kill) Animal Shelter since its inception.  Nettie fervently wished that all pet owners would adopt their furry friends from shelters rather than puppy mills or expensive breeders and prayed that each adoption would provide these beloved pets with their forever homes.

Annette was preceded in death by her husband, Robert D. “R.D.” Salmons, her parents Gary K. “G.K.” Spalding and Helen Darlene Scott Spalding, and her beloved Toto, Scarlett, Missy, Cisco, Hondo, and Pumpkin, just to name a few of God’s creatures that Nettie tended to.

The family will receive friends from 4:00 to 7:00 pm on Annette’s heavenly birthday, Monday, June 21, 2021, at Scrivner-Morrow Funeral Homes in Russellville, Missouri.

Interment will be in the Mount Carmel Cemetery near Eugene.

In lieu of flowers, memorial contributions are suggested to the Callaway Hills Animal Shelter, or any animal shelter or animal welfare organization of the donor’s choice.

Those wishing to send condolences to the family may do so at the www.scrivnermorrowrussellville.com website.
To send flowers to the family in memory of Annette "Nettie" Spalding Salmons, please visit our flower store.