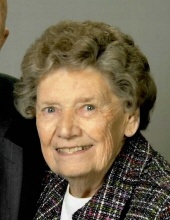 Anna Marie Knaebel, 85, of Jefferson City, passed away peacefully after battling cancer on Tuesday, June 16, 2020, at her home.

She was born February 16, 1935, in Jefferson City, the daughter of the late Albert and Elsie (Brauner) Heimericks.

Anna Marie was united in marriage on September 13, 1958, at Immaculate Conception Catholic Church in Jefferson City to James Edward Knaebel who survives at the home.

Anna Marie worked for National Life Insurance Company until becoming a homemaker and devoting herself to raising her children and helping James on the family farm. She then cared for her grandchildren until they were old enough to attend school.

She was a member of Immaculate Conception Catholic Church, enjoyed puzzles and embroidery. She enjoyed cooking for family gatherings and will always be remembered for her “grandma cake” and the “Knaebel jar”.

A prayer service will be held at 3 p.m. on Sunday, June 21, 2020, at Dulle-Trimble Funeral Home with visitation to follow till 6 p.m. Additional visitation will be 9-10 a.m. Monday at the funeral home.

Mass of Christian Burial will be 10:30 a.m. Monday at Immaculate Conception Catholic Church with the Rev. I.C. Medina officiating.

The general public is welcome to attend the services while following social distancing guidelines. Those attending the Mass will need to wear masks. Disposable masks will be provided by Dulle-Trimble Funeral Home if needed.

Those wishing to send condolences to the family may do so at the www.dulletrimble.com website.
To send flowers to the family in memory of Anna Marie Knaebel, please visit our flower store.