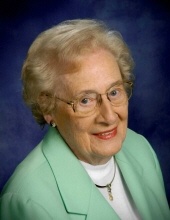 She was born on July 1, 1926, in Aholt, Missouri, the daughter of Julius Hugo “Jule” and Anna Christine (Westhues) Oidtman.

She grew up in Jefferson City, attended St Peter Grade School, and graduated in 1944 from St. Peter High School. She earned her R.N. from St. John Mercy Hospital School of Nursing in 1947. She began her lifelong career in nursing as a registered nurse at St. Mary’s Hospital. In 1948, she became the office nurse for Dr. Larry B. Klebba, retiring in 1987. Anna Marie was well respected in the medical community, not only running the office but assisting Dr. Klebba with performing x-rays, applying casts, suturing wounds, dispensing drugs when legal, and many other duties as she helped care for their patients. During those years in the office, which her husband referred to as the “golden years of medicine,” she established and maintained a wonderful and close relationship with her patients, remaining friends with many of them and their children and grandchildren throughout her retirement.

For Anna Marie, her priorities were God, family, and friends. She was an active and faithful member of St. Peter parish, and later the Cathedral of St. Joseph parish, donating her “time and treasure” in support of their spiritual and educational mission. She derived a great deal of pleasure from association with her family and friends at social and cultural events, and in travel, both internationally and domestically, especially the month-long February trips to South Padre Island, Texas and Destin, Florida with her siblings.

Mass of Christian Burial will be 10:00 a.m., Monday, November 15, 2021, at the Cathedral of St. Joseph with the Rev. Louis M. Nelen celebrating and the Rev. Frederick J. Elskamp con-celebrating.

Memorials are suggested to the Cathedral of St. Joseph Building Fund or to the Helias Catholic High School Foundation.

Those wishing to send condolences to the family may do so at the www.dulletrimble.com website.
To send flowers to the family in memory of Anna Marie Klebba, please visit our flower store.