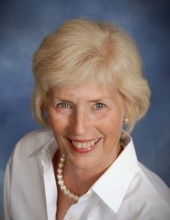 She was born December 19, 1942, in Taos, Missouri, the seventh child born to Frank William and Caroline Adelaide (Sanning) Borgmeyer. Ann attended St. Francis Xavier Grade School in Taos, Missouri and was a graduate of Fatima High School in Westphalia, MO.

On September 9, 1967, she was united in marriage to Robert William Kolb by Msgr. Charles Patterson in Taos, Missouri. Ann worked at the Missouri Capitol for many years assisting in public service through the Missouri Senate.

Ann was an active member of the Immaculate Conception parish and the community of Jefferson City. She found joy in nurturing life around her through her beautiful flowers and cooking delicious food, but especially through her cherished grandchildren.

The family is comforted knowing that Ann joins dear loved ones who preceded her in death, especially her husband of 50 years. She also joins her parents, a brother, Charles (Delores) Borgmeyer; two sisters, Teresa DeLorey and Mary (Raymond) Stuckenschneider; two sisters-in law, Sue Borgmeyer and Martha Borgmeyer; and a brother-in law, James Glover.

Mass of Christian Burial will be at 10:00 A.M. on Friday, April 12, 2019, at Immaculate Conception Catholic Church in Jefferson City with the Reverend Donald Antweiler officiating. Entombment will follow in Resurrection Chapel Mausoleum.

Those wishing to send condolences to the family may do so at the www.dulletrimble.com website.
To send flowers to the family in memory of Ann Alma Kolb, please visit our flower store.