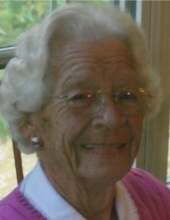 She was born on November 10, 1919, in Jefferson City, the daughter of the late Peter and Christine (Rackers) Heislen.

She was married on July 3, 1948, at Immaculate Conception Catholic Church in Jefferson City to Terence Peter Lock who preceded her in death on October 21, 1977.

She began her career working in the office at Tweedie Shoe Factory and became a homemaker after her marriage. She offered home child care while raising her own children and once they were in school, Angeline was a cook at Immaculate Conception School, and happily provided after school rides and treats to all her grandchildren and their friends up to the age of 94!

She was a long time member of Immaculate Conception Catholic Church; St. Anns Sodality; Immaculata Club, Rosary Chapter; and Daughters of Isabella. Angeline was a faithful volunteer at Vogelweid Learning Center and Birthright.

Angeline loved to fish and walk in her Loose Creek hills. She enjoyed going to St. George Island; taking rides in the car; playing cards and especially valued her time with her grandchildren, great-grandchildren, good friends and family.

Mass of Christian Burial will be at 11:30 a.m. on Saturday, August 11, 2018, at Immaculate Conception Catholic Church with the Rev. Donald J. Antweiler and Rev. I.C. Medina concelebrating.

Those wishing to email tributes or condolences to the family may do so at the www.dulletrimble.com website.
To send flowers to the family in memory of Angeline Mary Lock, please visit our flower store.