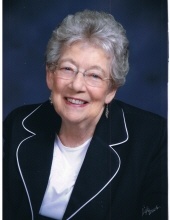 She was born in Jefferson City, MO on October 18, 1928, the daughter of the late Henry Albert and Kathryn Mary (Banwarth) Benne.

She was united in marriage on June 10, 1950, at Immaculate Conception Catholic Church, Jefferson City to Leonard Henry “Duke” Dusheke, who preceded her in death on September 16, 2009.

Mrs. Dusheke lived her entire life in Jefferson City, MO except for brief periods at Centertown, MO after she was born and Lexington, MO after her husband died. As a high school graduate, she didn’t have a career, but had a most interesting work history as she was employed at a large variety of businesses all over Jefferson City. Early employment was at F. W. Woolworth CO., and Obermann Manufacturing CO Office. For the IBM Service Bureau, she was sent to many businesses, keypunching, verifying and collating data into early models of computers. She continued in the computer field working in data processing and doing some programming at Central Bank, Frontier Insurance CO, Jefferson City Public Schools, and Capital City Telephone CO among others. She worked several years at the Department of Agriculture in data processing and for the State Auditor’s Office, as part of an audit team, working in many state offices including the Departments of Health and Revenue to name a few. In the seventies, she did the payroll at Charles E. Still Hospital. She retired from Scholastic, Inc. Office where she worked at various positions. She always said, “I never got a college degree, but I got an education because of my varied work history.”

She held memberships in the following organizations: Dan C. Coppin Fourth Degree Knights of Columbus Auxiliary, Roscoe B. Enloe Post American Legion Ladies Auxiliary, and was a lifetime member of VFW Ladies Auxiliary Baysinger/Sone Memorial 1003 Chapter. She was a former member of the Post Office Ladies Auxiliary, ABWA, the Daughters of Isabella, and the Immaculata Club.

Angie enjoyed many interests and activities over the years including sewing, crochet, embroidery, quilting, flower gardening, genealogy, painting, stamp and postcard collecting and traveling. She enjoyed special friendships with her card club and enjoyed celebrating anniversaries with four other couples who were married on the same day in Jefferson City. She also enjoyed spending time at their Lake of the Ozarks cabin, but most of all, she enjoyed the people in her life, her family, friends, and acquaintances.

She was preceded in death by her parents, and a brother-in-law, Richard Dusheke.

Mass of Christian Burial will be 10 a.m. Saturday December 14, 2019, at St. Peter Catholic Church with the Rev. Jeremy Secrist officiating.

Memorials suggested are Masses, St. Peter Catholic Church, the Discalced Carmelite Sisters, and the Friends of Cedron Cemetery.
To send flowers to the family in memory of Angeline Catherine "Angie" Dusheke, please visit our flower store.